If you are interested in the companion podcast to this piece, it is available from: The 22 Point website and addresses the same topic but contains slightly different info.

Last week we looked at camera apps for low vision users, concentrating on features like large buttons. This week, the main focus is on Talkback, however one of the most popular photo apps for blind users currently actually has neglected to label any of its buttons, so even then it’s not cut and dried.

So, the main criteria I used for a good, blind useable camera app are:

Talkback compatibility – Only five of the 36 apps (I added Back Camera Selfie to the list from last week) had all buttons labelled, another seven had some buttons labelled and the rest either had buttons you could access but which weren’t labelled, and some you couldn’t even get to the buttons, so the best Talkback accessible apps were:

“Smart Selfie” (more on this shortly)

Standard camera controls (choice of camera / video, flash, focus, iso etc) with an uncluttered interface and a large (easy to find) shutter button make this a good option for general photography. Most controls, including shutter can be assigned to the volume keys. 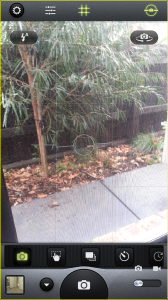 No volume key support but tap anywhere on screen to shoot ability make Camera Awesome a contender as well. There are a number of buttons on screen at once. Although most are small they are on a black background so easier to see if using some sight. The app also offers a number of post processing effects.

Similar to Open Camera has the standard features, not quite as many options as Open Camera, although the shutter button takes up the whole bottom of the screen so is about 6.5x2cm on my Note 2.

[Imstacamera – no controls to see here (there is another icon added to your apps to edit app settings!]

having no buttons to label means no unlabeled buttons!  InstaCamera works by snapping one or more pictures as soon as you start the app, and then exiting.  Two launcher icons are installed with the app – one to launch the camera, and one to launch the settings.  The settings are accessible and include options such as whether to automatically focus and whether to remain in the camera app after taking pictures, in which case additional pictures can be taken simply by tapping the screen (double tapping with Talkback).

ProCapture, Binoculars, Camera Zoom, Camera ICS, ProCam and Cymera all had some buttons labelled (particularly the shutter) but others unlabelled.

Useable without sight – I scored this seperately to Talkback, as for many apps, having them set to ‘auto’ mode (generally the default) for flash, focus, exposure, white balance etc may reduce the need to access some of the buttons, as long as the shutter button (hardware or software) can be used (or in the case of 15 apps, tapping anywhere on the screen can be set to take a photo). This meant that 19 of the apps were theoretically useable without sight while I would rule out the other 17. Camera Zoom FX was the first one I tried which had the option of voice control, so you could say “Cheese” to take the photo, however this wasn’t setup by default and the controls weren’t accessible to set it up.

Face recognition – One of the most sought after camera features by blind users, only three of the apps tested not only recognised when a face was visible, but gave the user audible feedback about it, and we can thank the “selfie” trend for all three: 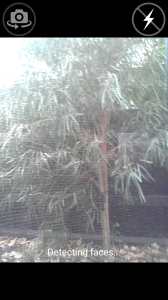 lets you set the number of faces and number of images to take. It has the option to give face centering instructions, though I found this generally didn’t say anything.

[Smart Selfie – works really well, not sure why preview is so small though]

Works really well and advises whether to move the device left, right, up, down, back or forward to get in shot and centred. Strangely I found the preview only takes up about a quarter of the screen. 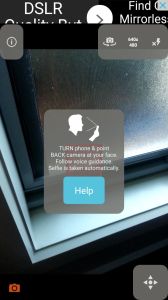 [Image of Back Camera Selfie]

Breaks my rule of not using ad supported only apps.  Otherwise it works similarly to Smart selfie, though more responsive. While the preview is full screen, there is a large instructions panel in the middle which gets in the way if you wish to visually see the subject during the photograph as well.

In practice, for a blind user, I would recommend:

For photos of people: Back Camera Selfie works best, although set to a very low resolution by default. Although its buttons aren’t labelled, the resolution is announced on its button although after pressing it you need to explore down the right hand side of the screen to find the different resolutions (highest at the bottom of the list). Smart Selfie has more labelled buttons so try both and see which you prefer.

For DSLR type photography: With the same caveat as in last week’s article – that until Android 5’s Camera2 API is more widely adopted, there is only a certain amount of DSLR capability available in most apps. For now the app with the most functionality accessible is Open Camera or Camera Awesome.

For the simplest photography, I’d recommend Google camera for traditional ‘point and shoot’ as it’s large button is easy to get to. Alternatively I quite like InstaCamera which doesn’t use any buttons. It has a seperate ‘settings’ app which lets you setup how it works, and when you launch the main instacamera app, it simply takes it’s photo and exits (or can be set to stay in camera mode and you tap (double tap with Talkback) the screen to take additional photos). You can set it to take multiple photos initially although it does not have a setting to automatically pick the best (A Better Camera, one of the low vision recommendations has such a feature, however it’s buttons aren’t labelled in order to set it up).