This setup would be aimed for someone who wanted the simplest, most basic phone to maybe call a few specific numbers quickly and easily and perform some specific and basic tasks, someone who has previously had a large print / big button feature phone perhaps.

The setup should have large print, simple icons and a single home screen.

Handset:
– Look for a phone with a hardware home key (a phycial button on the front), rather than software only buttons (like the Nexus devices have).
– The phone should be small enough and light enough that the user can hold and use it comfortably, yet have as large a screen as practical.
– A protective phone case is a good idea, however be sure and look for one which keeps the phones hardware buttons (eg volume) as easy to access as possible.

– Senior launcher can be useful where a small number of pre-set text messages or phone numbers are often used.
– Big Launcher can be setup with shortcuts on launcher to directly call or edit SMS messages to certain numbers and you can easily setup shortcuts to other apps (eg a magnifier, or camera) as needed.

– Senior Launcher and Big Launcher both come with their own inbuilt dialer / contacts features, however BigDialer can provide a more customisable dialer interface if desired. 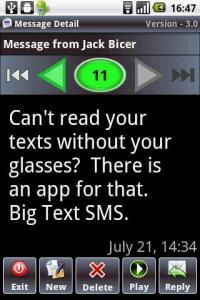 – Again Senior Launcher and Big Launcher both offer SMS facilities, however Big Text SMS offers a few additional features such as automatically showing a message when received, though some of its buttons may appear complex to some users.

– Lock screen rotation so layout doesn’t suddenly change.
– Haptic feedback (vibration) may be useful to have on
– Turn of features which won’t be used such as Bluetooth, GPS, Wi-Fi, Mobile data (select as appropriate) which will make the battery last longer.
– Ensure volumes and brightness are at suitable levels.

Any other tips for this setup? Please share your thoughts in the comments below!